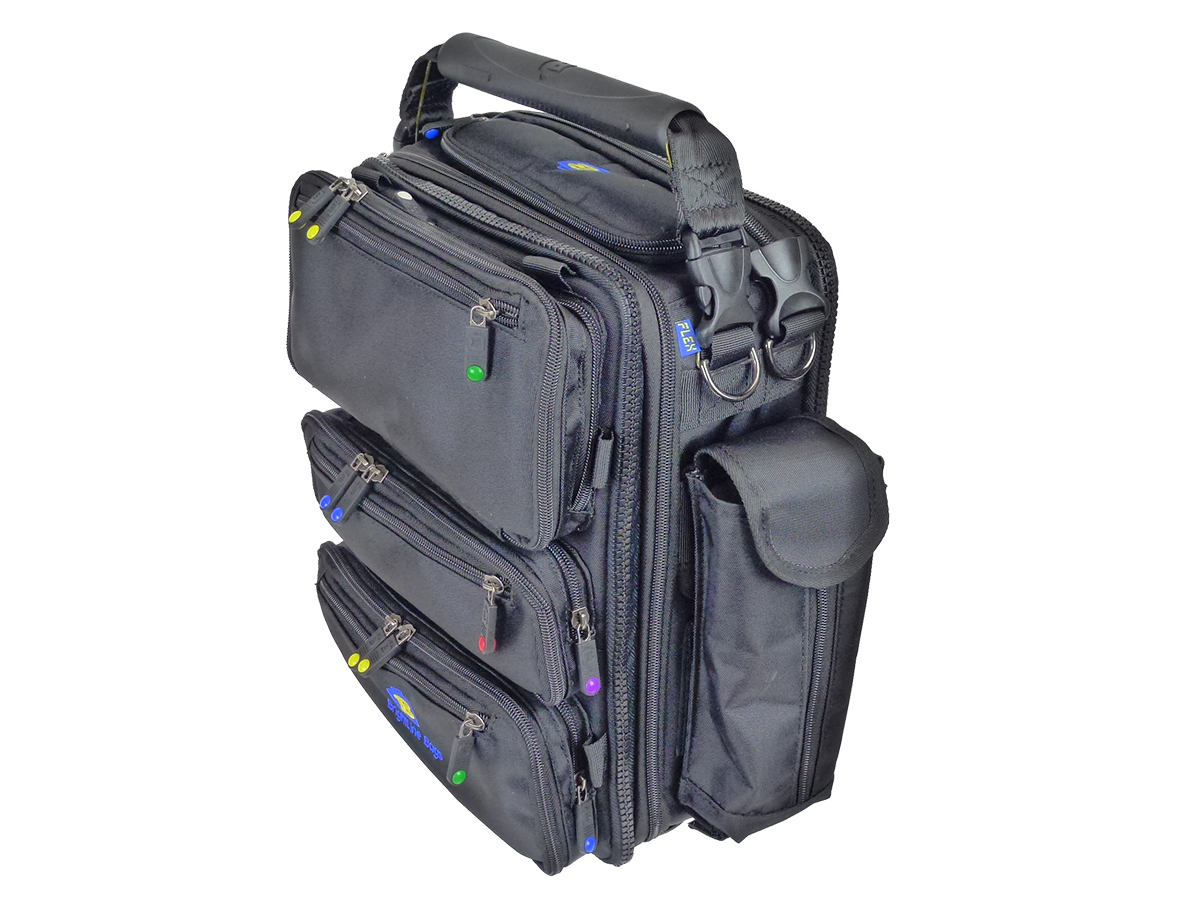 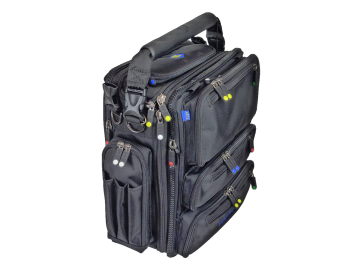 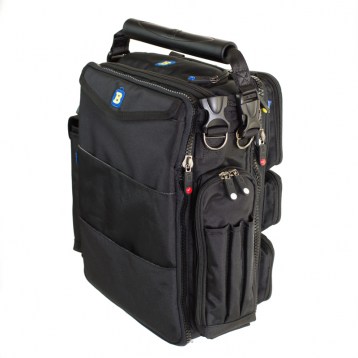 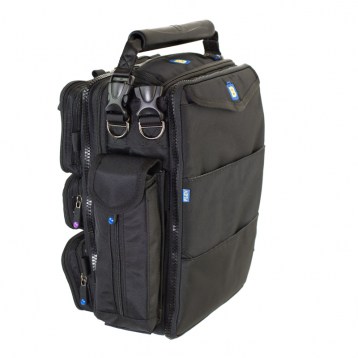 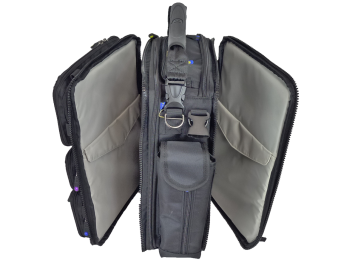 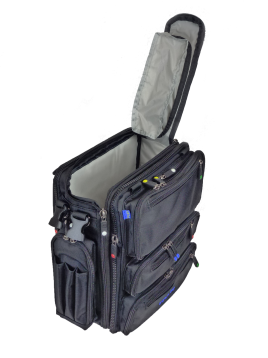 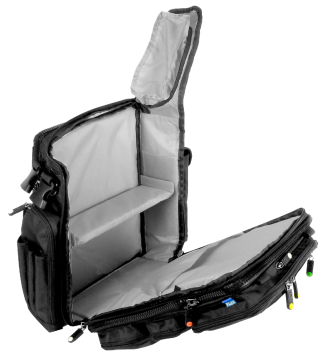 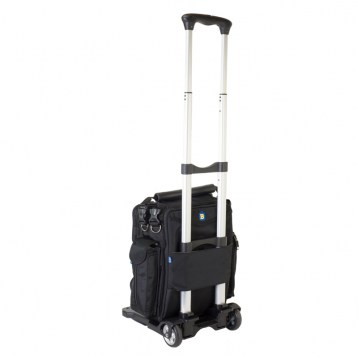 The B4 SWIFT is often recommended as the ideal VFR flight bag. It's designed to hold one or two full-sized headsets plus a handful of charts, and/or an iPad, plus all the small stuff you'll want along for the ride. It also serves as an unbeatable carry-on personal bag when traveling on commercial flights, or just as a terrific daily bag for a wide variety of personal and professional uses.

The B4 consists of the POCKET CAP FRONT, CENTER SECTION 4, FLAT CAP REAR, along with two Side Pockets, Alpha and Charlie.  (It also includes the MH and SS.  It does NOT include a SLIM HANDLE KIT.  If you ever think you'd like to remove the CS4 and zip just the two End Caps together to make the B0 SLIM, you'll need to make sure you also order an slim handle kit.)

The CS4 provides, that's right, four inches of storage depth, but keep in mind that there is also two thin flat storage areas BETWEEN the three modules. (Remember, it is a soft bag so it can expand slightly in every direction.)  Keep in mind also that you can add any other Center Section to the B4 (like zip a CS2 in between the CS4 and the FCR) to add more storage on certain days.  Any FLEX System module can zip onto any other FLEX System module. The Main Compartment of the CS4 has locking zipper sliders.

This configuration will very commonly be used to carry two full-sized aviation headsets of any brand.  (There is a nice, slightly-tricky way place two large headsets - like the BOSE A20 - inside this space. Just "intertwine" the ear cups in opposite directions. It's really nice to fit two headsets of any kind in such a relatively small space.)

There is a specially-designed pocket on top of the CS4 to hold Sunglasses and their case.

A small collection of charts or flight docs can go in the space between the CS4 and either of the End Caps. A 13" Ultrabook or MacBook Pro can also fit into this "in between" space, and the iPad (or other tablet) can go in the main pocket on the FLAT CAP REAR

The B4 SWIFT also works amazingly well as a daily personal bag and/or as a commercial carry-on bag. A 13" laptop plus a load of documentation plus an iPad, plus all the small stuff like cables, adapters and support stuff for all your technology, your digital camera, snacks, etc - all of this fits easily in this bag. Even your noise-reduction headset for those long flights.

The other great thing about this bag is that it is actually TWO bags for the price of one. Not only is it a B4 SWIFT, but you can also build a B0 SLIM by removing the center section and zipping just the two End Cap modules together.  (If you ever think you'd like to remove the CS4 and zip just the two End Caps together to make the B0 SLIM, you'll need to make sure you also order an slim handle kit.)

PCF:   The POCKET CAP FRONT module offers a variety of pockets organized into three "main" pockets and six "secondary" pockets for a total of nine small pockets on the front panel. In these nine pockets you'll store all the cords, cables, chargers, batteries, stylus, memory cards, USB drives, etc, for all your electronic gear. All these important items will finally be separated and organized like you've always wanted. In addition, you'll have room for your flight timer, fuel testers, E6B, flashlights, compact portable GPS, etc. Not to mention space for your wallet, keys, cellphone, business cards, multi-tool, glasses, pens, markers, and things like Ibuprofen, Chapstick, bandaids, etc, and even your digital camera. There is also a flat half-height slip pocket on the inner surface of the module where you can stow an important document or two like a copy of your medical or your passport.

CS4:   Next, comes the CS4 (4-inch Center Section), which is designed to hold two full sized aviation headsets.  The CS4 comes with a divider shelf which serves to separate the compartment if necessary.  You can instead fit 13” laptops or a small collection of documents (or both). (Many, but not all, 14" laptops will also fit. - But no 15" laptops will fit.) The CS4 has a really versatile dual-access feature. First, you get full top-access. You can unzip just the top of the bag to give access to your stuff right through the top of the bag. And then when you need, everything can also be accessed by unzipping the entire front panel all the way down to the bottom, giving access to the entire gray interior of the CS4. The Main Compartment of the CS4 has locking zipper sliders. The other key thing about the CS4 is that it has two FLEX-Mount Side Pocket stations, one on each side, for attaching the two included side pockets. You can, of course, also trade out the pockets any time you like later on.

The FLAT CAP REAR module offers two flat pockets on the outside, and one flat half-height slip pocket on the inner surface of the module. The primary outer pocket is accessed from the top and has a cover flap that is secured with Velcro. This where you'll likely store your iPad (as long as it's not in a thick case), or a manilla folder or two for some documents, or a magazine. There is a second flat panel that covers two-thirds of the outside of the main panel that is broken into two halves - an upper panel and a lower panel. By default, the bottom edge of the upper panel is "tucked" into the top edge of the lower panel.  This allows both panels to act together as a single slip pocket that works great for sticking a boarding pass or other simple paperwork here.  If the top panel is "untucked" from the bottom panel, this allows the telescoping tubes of a suitcase or folding cart to pass through and the panel serves to secure your bag to those tubes (especially when this FLAT CAP REAR is attached to other modules to form bigger bags like the B2 COMPUTE, B4 SWIFT or the B7 FLIGHT).  Then, when you're done putting your BrightLine Bag on top of your suitcase, you can just "tuck" the top panel back into the bottom panel and it becomes a slip pocket again.

And finally, the SIDE POCKETS. The side pockets attach to the side of any module that has a FLEX-Mount Side Pocket Station. In the case of the B4, the side pockets will mount on the sides of the CS4. This mounting method is super-secure, simple to install, and best of all, your pockets don't LOOK like they're detachable.

SIDE POCKET ALPHA is often called the "Radio Pocket". It will hold any, repeat - ANY, handheld radio. And the top flap is such that the antenna can just stick right out the side. In addition, the SPA is great for holding a water bottle. The front face of the pocket has an expansion zipper, so the pocket can hold larger or smaller water bottles. It will hold up to a 20 oz bottle.

SIDE POCKET CHARLIE is often called the "Pen Pocket". It has four pen slots on the outer surface plus a zippered pouch that has room for pens, marker, highlighter, spare reading glasses, etc. Of course, many people will put completely different things in there besides pens. It's a great pocket many different purposes.